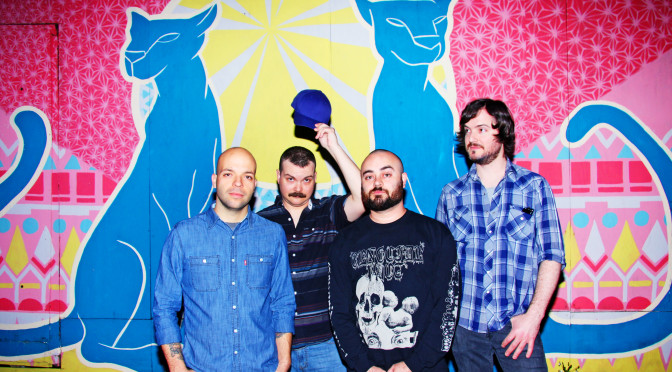 Torche‘s Fall European Tour is running through December 3th in Athens, Greece including stops in Scandinavia and much of Eastern Europe. Miami’ Torche recently released ‘Restarter’, the band’s fourth album and first on the Pennsylvania heavy-music label Relapse Records. We caught up with Steve Brooks, Torche’s singer/guitar player, before their show at Mostovna, Nova Gorica (Slovenia) supported by Damned Pilots and The Canyon Observer -click here for Facebook event and tickets info.

Hi Steve, how are you doing?
I’m great. Thank you for the interview

How’s the European tour going, how are people responding to it?
We’re playing a lot of new areas we never get to, so it’s an adventure. The response has been great. New territory we hope to come back to.

What do you think of the european audience? Is it different from the american audience?
It really depends on the vibe of the venue, sound, atmosphere. Some crowds lose their minds more than others. Same goes for America too.

Tell me something about what influenced you on a musical level to write your ‘Restarter’, it seems to me a bit darker than your previous records…
‘Harmonicraft’ was a high energy and uplifting record. So, while writing ‘Restarter’, we just ended up stripping and slowing things down. Kind of a Gary Numan and Kraftwerk inspired approach. It ended up being a little darker this time.

Can you tell me something regarding your Z tuning’?
It’s low, loose and sounds like a bomb. I’ve been incorporating the ‘none lower’ tuning into songs with my old band Floor since 1992 and it’s also a part of the Torche sound.

How important is for you guys the sound of a band and its originality?
It’s important that we have our identity. That keeps us interested and inspired. If we sounded like other bands, we’d bore ourselves. We’re always evolving and trying different things.

When you started, you came out together with sludge bands such as Baroness, Mastodon and Kylesa, almost creating a scene that seemed to be riding the same wave. Could you tell me something about the beginning of the band?
Torche started after the break up my old band Floor. I have played with all kinds of bands in the South for decades. I think if there’s a wave of Mastodon, Baroness, Kylesa and Torche it’s because of our geography and the fact that we’re still around, putting out records and touring.

This next one maybe it’s a little obvious, what’s your opinion of the current political world and of what happened in Paris?
I’m disgusted by what I see.

Going through your Facebook profile, I found out that when you were a kid you were a true metal head. Can you name your favorite bands of that period and the ones you still like?
It started with KISS at a very young age. Some of my favorites in my youth were LOUDNESS, ACCEPT, IRON MAIDEN, WASP, OZZY/SABBATH and then in my teens bands like SLAYER, DARK ANGEL, KREATOR. I still love all the stuff I grew up on.

Do you know any Slovenian or Italian band? Have you ever heard the bands that will play with you at the Mostovna’ concert?I haven’t. I’m kind of out of touch because there are so many bands, I can’t keep up. But, I remember the ones I like if we play shows together.

What do you talk about in your lyrics?
Melodies first and then whatever is on my mind while writing.

Can you tell us something about your video ‘Annihilation Affair’? How do you feel about having worked with Phil Mucci? Phil Mucci is one of my favorite video directors, so we were blown away that he was interested in working with us and the video turned out incredible.

Is there any band you like right now and that you’d like to suggest to our readers?
The band WRONG from Miami. They have a new record coming out on Relapse soon. In the meantime, check out their ep ‘Stop Giving’

Can you live off your music?
Barely, but so far I’m getting by.

This society, love it or hate it?
Not much time to hate, much more time to love.

Special thanks to Don Nutz and Sg. Ote from Damned Pilots